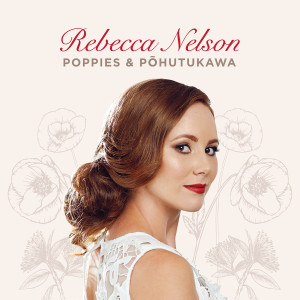 Introduced to the magic of the stage at just four years old by her grandmother, the idea of a career in music was planted early in Nelson’s mind. Having become inspired by performances such as Shirley Jones’s ‘You’ll Never Walk Alone’ and then at 15 by the rise of Welsh singer Charlotte Church it became evident that this was a very serious option.

Now 29, Rebecca’s determination and love for her craft has taken her on the unusual path from busker to performing for royalty (Prince Charles and Prince Harry), singing alongside fellow kiwis Sol3 Mio and national anthems at international rugby matches (for the Irish team, French team, and All Blacks), being chosen as the Royal New Zealand Navy Band’s official singer, and in turn performing at ANZAC commemorations at Gallipoli in 2015 and in France at the 100 year commemorations of the Battle of the Somme last year.

With a true passion for war time music and a genuine desire to keep the songs, stories and memories of veterans alive, Rebecca Nelson has become a true star within the military community.

With the release of her album Poppies & Pōhutukawa on April 7, which includes collaborations with the Royal New Zealand Navy Band and Christchurch Boys’ Choir, Rebecca Nelson is set to become a household name across the nation.

One Reply to “New Album ‘Poppies & Pohutukawa’ out April 7”