WOW is all I can say… but let’s start at the beginning.

I left on the Saturday for a 12 hour flight sitting next to a screaming child but I did not care I was on my way to CHINA! I arrived early morning where I was greeted by my taxi, we waited around for another hour for the guest speaker to arrive from her flight as we were sharing the same car.  My taxi driver couldn’t speak any English but he bought me a Cappuccino so he was already in the good books. I spent this hour people watching… how fascinating! 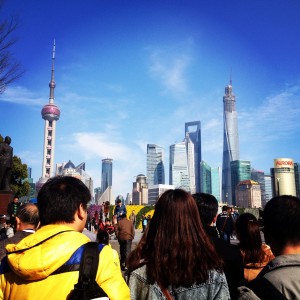 After what seemed like forever! We arrived at our hotel which was located in the heart of the city of Shanghai. Our rooms unfortunately weren’t ready so Marie (guest speaker) and I filled up on coffee in the lobby killing some time. At this stage you have to work out whether you can stay awake or go have a nap. I decided to push through and once we received our room keys I was out of there for a look around (aka SHOPPING). I did however get lost 3 times and ended back at the hotel to get pointed in the right direction.

I finally came across “THE BUND” an amazing strip down by the water front. Shanghai is a beautiful city and surprisingly very European, I would definitely recommend putting this down as a city to visit. I happened to stumble upon the shopping district and had a wander around, I can tell you ladies this place is FANTASTIC for shopping wow! Walking through the city you see a lot of interesting things, children using the streets as toilets, dogs dressed as humans and of course a lot of people selling bags and watches behind closed doors. After a while I headed back to the hotel for some dinner and a rest, I had a tickle in the back of my throat and could tell I was about to get the flu so had to stay on top of it all. Back at the hotel I realised that the only TV stations they had were all Chinese! No “Friends” or “Simpsons”!!! Sleep it was then. 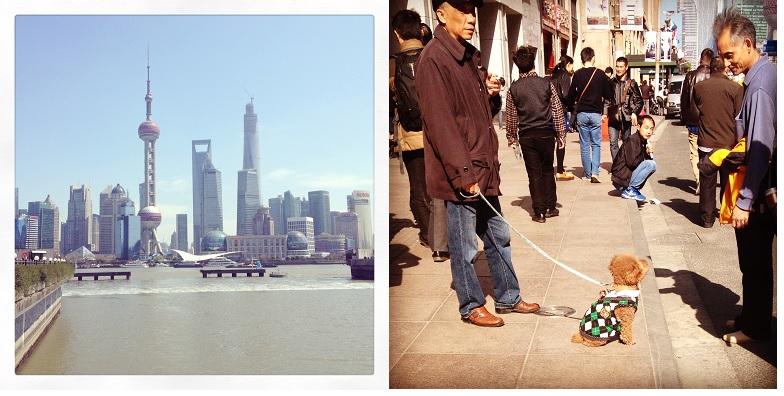 After 9 hours of sleep I woke up full of the flu! I headed outside to find the nearest Starbucks (there happens to be one 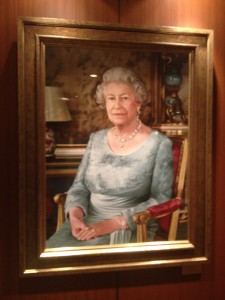 located on every corner) to get some breakfast then went back to sleep for another couple of hours as we weren’t getting picked up until 11.30am.

We made it to the Queen Elizabeth round lunch time where I found out I was performing that evening! AHHHHHHHHHH…………………

Our rooms were absolutely stunning so I made myself at home and curled up in bed until I was required for sound check and a run through. Thank goodness for adrenalin I wouldn’t have survived otherwise, performing while you are sick I can tell you is not fun. When I walked into the theatre it took my breath away. It is so beautiful and HUGE! The musicians on this ship were from all around the world but man can they play! We had a really good sound check so I headed off to get some food and guess what… another nap! We were docked in Shanghai until 1030pm so I wasn’t expecting a full house. The theatre itself 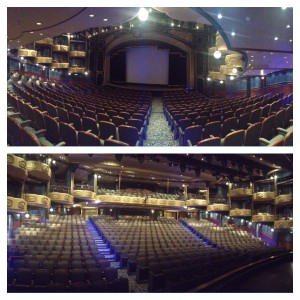 holds 700, to get half of it full I would be happy as most people would of still be out looking around the city.

My first set of shows went really well, the Cunard audience was different to the P & O more reserved but I picked up on this pretty fast and worked my magic. I had a laugh as I was informed at 10.30am we would start moving, I did not expect what happened to happen. Just starting into “Ave Maria” the stage starts to vibrate and all of a sudden it feels like an earthquake, Lucky I am from Christchurch and can handle anything.

The next day I had a wander around the ship, it’s like stepping back in time. The ballroom is exquisite, there is an art gallery, yacht club and many more fascinating rooms on board.The food is out of this world and so much to choose from and they had a SOFT SERVE machine! (It’s the small things). I headed to Marie’s lecture on Asian art history and after this straight back to bed where I was to stay all afternoon and evening. Unfortunately I didn’t get to spend much time around the ship due to being ill, I had to knuckle down and rest up. That night it was black tie and also a masked ball – my costume however was Pyjamas.

After a few days in bed I was feeling a lot better and we were docked at the next port Xiamen (pronounced sha-mun NOT X-MEN. I hopped on the bus that was taking people to town where I meet a lovely gentlemen called Terry and his friends who invited me to walk around with them, talk about entertaining! I’m glad I said yes, straight off the bus we were greeted by beggars who hound you and I felt safer in a group. We had to go find a bank to change some money and I was determined to buy a handbag. We walked around for a couple of hours seeing the sites and looking through shops until I found my handbag with the help of the lads of course and headed back to the ship as I was due to be interviewed for the morning TV program they run.

That night I headed out with Marie to a restaurant and then onto the ballroom where we watched the passengers take the floor. One of the passengers saw me, next minute I was up on the dance floor. After this ship I have vowed to take some lessons so next time I will dominate that floor. Another early night for me as I was set to perform the last night on the ship. 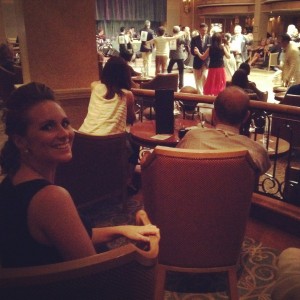 My second show I was sharing the stage with a Japanese instrumentalist which meant 25minutes each. This crowd was a lot bigger than the first show and really seemed to appreciate what I was singing. After the two shows I rushed to the ballroom as that night they were having a “strictly come dancing” competition between the passengers and the professionals who were also performing. This is great entertainment!!

We arrived in Hong Kong around 8.30am the next morning and had to be out of our rooms at 9.00am. Since I had done my packing at midnight I headed up for breakfast and read my book to kill some time this was until I found out we were docked at a SHOPPING MALL. It was WAY out of my price range we are talking all the high end labels but it was wonderful to see a miu miu bag in person. I didn’t get to see much of Hong Kong but it looks like an impressive city and I would love to head back.

The flight home went really fast AND I had the whole row to myself for both flights! (when does this ever happen?). Now my focus has changed, I am in full Navy mode as I prepare to head to Turkey in just over a week for my biggest adventure yet!