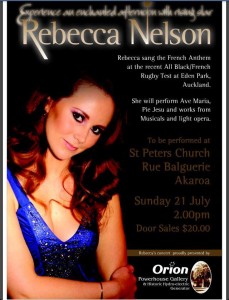 Born and raised in Christchurch, Rebecca has experienced success both at home in New Zealand and abroad. Some highlights include touring around Ireland with The Priests as their guest soloist and joining Will Martin on his South Island concert tour of New Zealand.

Rebecca has had the honor of performing numerous National Anthems including the French, Irish and New Zealand anthems at major sporting events in front of crowds of up to 45,000 people.

In 2011 she released her self-produced debut Album “Pure Imagination” with great success.

2013 promises to be another successful year, having just returned from a North Island concert tour with  The Royal New Zealand Navy Band, she has been booked for a number of charity events and corporate functions.

Share an afternoon with Rebecca as she takes you on a magical journey with her incredible vocal range and power. The show will incorporate a variety of songs, from favourites such as “Ave Maria” and “Pie Jesu”, to musicals and light opera.

With her stunning voice, complemented by her wonderful stage presence, and infectious personality – REBECCA NELSON is truly an artist not to be missed.